Case Study: How College Savings Went from Spinning Its Wheels to Gaining Traction 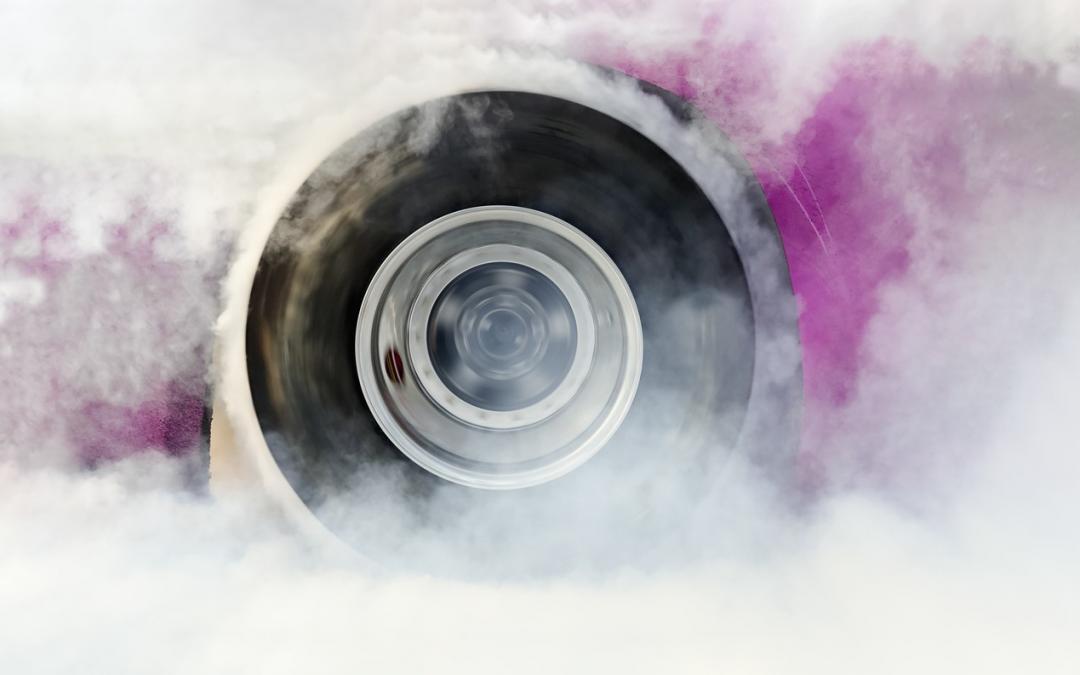 One of the toughest tasks for entrepreneurs is prioritizing. When you own a business, everything seems urgent and critical to success. The reality is that most small businesses don’t have the resources to pursue all their founder’s big ideas. And if they try to, they just end up spinning their wheels.

It was July 2018 and Marcos Cordero felt College Savings Holdings Inc. had hit a wall. A graduate of MIT with an MBA from Harvard, Cordero had founded the company in 1999 after deciding there was a big opportunity helping America head off its student loan crisis. The company created SavingsforCollege.com to educate parents about 529 plans, Roth IRAs and other college savings plans. Eventually, it launched Gradvisor.com to help employers set up 529 college savings plans for their employees.

After years of solid growth, however, the company experienced several consecutive months of little to no revenue growth. The leadership team dabbled with implementing the Rockefeller habits and other techniques suggested in management journals and best-selling books, but could not seem to gain traction.

“We’d meet as a team and have all these wonderful brainstorming sessions with great ideas, and lots of excitement,” Cordero recalls. “Then, a few weeks or months later, it felt like we had just spun our wheels. Our numbers hadn’t moved, and multiple projects were half-baked with no impact.”

That’s when Cordero reached out to Cesar Quintero and The Profit Recipe for coaching and facilitation services, including help implementing Entrepreneurial Operating System.

The power of short-term goals

In the first leadership meeting facilitated by The Profit Recipe, it became apparent that the company’s problem was not that it was not doing enough, but that it was trying to tackle too many things at once. Cordero, like so many successful entrepreneurs, had a tendency to return from seminars eager to implement some new practices only to derail some other initiative.

“We thought that because we’re such a good team, we can take on a lot every quarter,” said Cordero.

This told The Profit Recipe that the company needed to regain its focus before it could regain its traction. Instead of creating a million goals and not reaching one of them, he helped the team devise a shorter list of short-term goals and set deadlines for achieving them. Through this process, Cordero came to learn that one of his shortcomings as an inability to say no.

“It was a little scary because it sounds like you are saying no to so many other things you want to do,” Cordero said of having to trim back his goals.“

Learning how to dry short-term goals – known as “rocks” in EOS parlance – that can be achieved in weeks rather than months, relieved much of his anxiety.

“Cesar and The Profit Recipe’s coaching really convinced us to trust the process by setting six-week deadlines and promising that I would see results,” Cordero explains. “That helped me get comfortable because I don’t have to wait a whole quarter to see if something works.”

In other words, the processes established under EOS would quickly identify when, where and why the company was going off track.

Another way The Profit Recipe helped the team was by clarifying each member’s roles and responsibilities. In EOS, this is done by creating an accountability chart to ensure the right people are in the right seats. In the case of Savings for College, that meant making sure that creatives are doing creative work, and that those with project management skills were responsible for making sure software developers are meeting production deadlines. 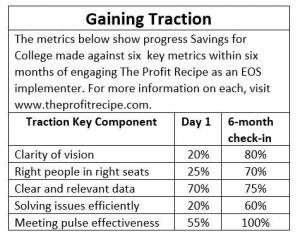 “What we realized after reviewing the accountability chart was that just because someone is good at visualizing the product does not mean he or she has to be responsible for managing the process,” Cordero said.

Upon further evaluation, a member of the leadership team was assigned the role of EOS Integrator, which made them responsible for ensuring that everyone in the business is aligned around the game plan devised under the EOS.

Cordero was assigned the role of visionary, allowing him to focus all of his attention on longer-term growth strategies.

“The difference pre-Cesar and post-Cesar is palatable,” said Cordero. “Our team operates at a much faster, coordinated cadence, and there’s energy in the air again at the office. We are all aligned and focused on the same thing – imagine that! We’ve seen strong double-digit growth numbers in revenue and traffic that we haven’t seen in over a year.”

Aside from the EOS integration, Cordero has delegated responsibility for hitting certain financial goals.

“I now do what I enjoy doing (and think I’m good at),” he says. “I’ve been able to spend a lot more time working on huge deals that could be game changers and am not nearly as bogged down in the day to day operations. It’s greatest.”

Cordero realizes now why, despite his Harvard MBA, he was unable to make the changes needed on his own.

“They say the best things in life are not complex; they are actually very simple. But, they are very hard to do. It’s not rocket science, but it’s hard, and to have a coach like Cesar makes a big difference.”