Within 10 months of engaging The Profit Recipe, Brett Trembly was able to achieve his goal of spending more time working on the business, instead of in the business.

Miami-based attorney Brett Trembly wasn’t struggling to grow when he hired The Profit Recipe in January 2018. He was struggling with how to prepare for all the growth that lay ahead.

“We were at full capacity,” recalls Trembly, founding partner of Trembly Law Firm. “Our challenge was moving to the next level. I knew I had to get away from the mindset of being an attorney and operate as an actual business owner. It was time to get people to buy in and start spreading some of the responsibility for the growth we were experiencing.”

The firm had good people, but Trembly was concerned both he and they would be overwhelmed if they did not change how they ran the firm.

“If we brought in more people to take on more clients,” Trembly explained, “did we need more support staff or more lawyers? Every person you add to a law firm is like adding a new spoke to a wheel. How do you make sure that everyone knows the mission?”

Trembly read “Traction: Get a Grip on Your Business,” which he had learned of from connections he’d made through the South Florida chapter of the Entrepreneurs’ Organization. He liked how the short-term goal setting and other techniques described in the book could be used to help companies quickly gain traction.

One step away from chaos

But after months of trying to implement the systems on his own, Trembly had gained little traction. So, he hired licensed EOS Implementer Cesar Quintero.

“The danger of the entrepreneurial thought process,” he observed, “is that it’s often one step away from chaos. Without a structure like Traction, it’s me walking around barking orders and three days later I probably moved on to the next big idea.”

Quintero immediately focused on helping Trembly Law Firm focus via the implementation of the six components of the Entrepreneurial Operating System (EOS). With his guidance, Trembly’s leadership team revisited the firm’s five core values, org chart and even how and when it conducted meetings.

Over the course of five weeks, every employee was asked to attend a new weekly leadership meeting to discuss the firm’s core values. Each was asked to write down what they thought they meant, read what they had written out loud and then participate in a brief discussion. Trembly remained silent throughout the entire process.

“The team determined them, which is as it should be, considering we would all operate and have our accomplishments measured under them,” Trembly said. “The focus this created was substantial.”

The leadership team also worked on tools that helped the team gain accountability. Through different tools from the EOS Toolbox, everyone was aligned with the right structure (Accountability Chart), with clearly defined responsibilities for each seat, and scorecards for each position.

“Accountability and the enthusiasm to report on progress does astounding things to focus,” observed Trembly. “Our approach to reviewing how people perform changed drastically, too. We know what to measure now. Cesar was instrumental in this.”

Quintero coached the firm’s leaders on how to use highly structured “Level 10” meetings to hold employees accountable for reaching their goals on a weekly and quarterly basis. By definition, Level 10 meetings occur once a week on the same day and time, use the same agenda, focus on progress toward rocks and always end on time.

“Previously, our weekly Friday meetings were more focused on our clients’ cases,” Trembly said. “We weren’t looking at the big picture of what the firm needed to accomplish to move forward.”

“Meetings about what’s happening with clients and their cases still happen,” Trembly said, “They get their own Level 10 meeting in each department But now we have a specific time and place where we focus only on business strategic direction with the Leadership team. Specific tasks are identified, accomplished, and measured. When you’re familiar with EOS terminology, you’ll understand what it means to move those ‘Rocks’ where they’re supposed to be.” Rocks are the top priorities for the company and each dept to achieve that quarter in order to get closer to the vision and move the company forward. 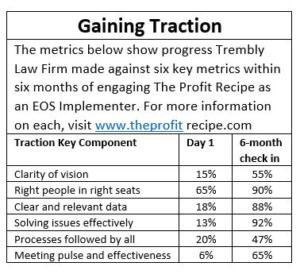 The leadership team and rank-and-file employees are aligned via their focus on shared values, metrics and short-term goals. They hold themselves accountable for reaching those goals at weekly meetings.

Although he is still overseeing sales and marketing, Brett Trembly is spending more of his day working on the business instead of in the business.

“I’ve been able to get out of most of the firm’s operations, but still keep my finger on the pulse of what’s going on,” he said. “I’m focusing on client relationships and finding the right person to be our ‘smarketing’ director. I’m doing what EOS allows for when you actually implement it. I get to live by design.”

Ten months after hiring The Profit Recipe, Trembly has a new outlook on leadership. “The only way for a leader to grow a business in a meaningful, sustained way, is to delegate,” said  Trembly. “You have to create leaders around you and that simply can’t be done without structure. A lot of businesses get stuck because they cannot transition from just hustle and grind to an actual structured business.”