The E-Volution of Chuck Bender 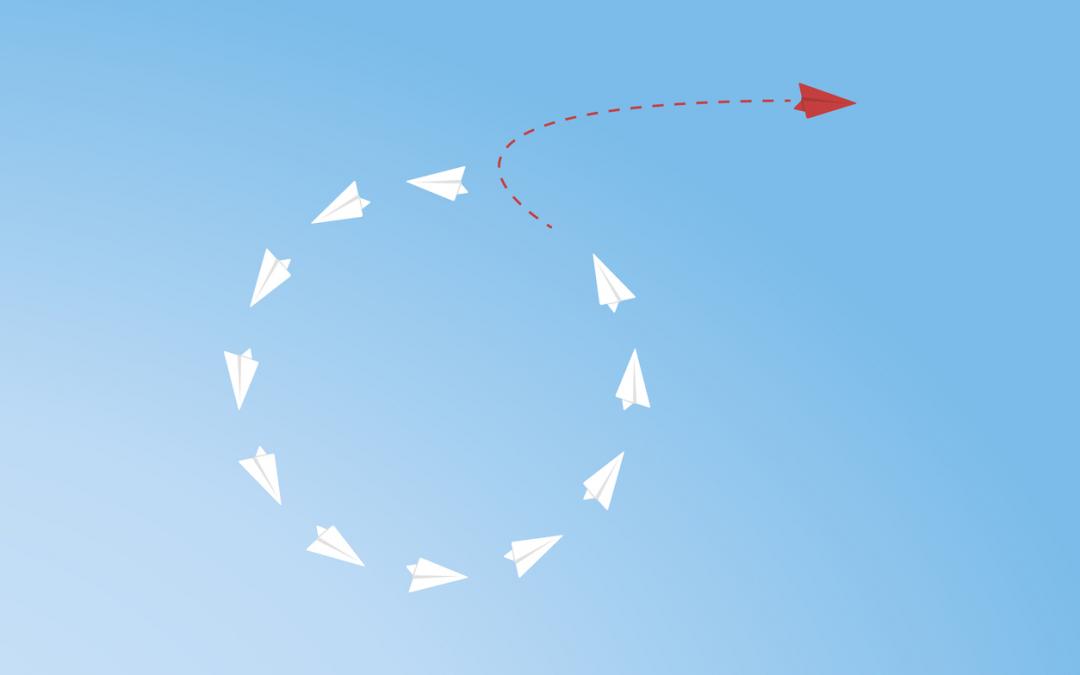 An “entrepreneurial evolution” guided by a sense of purpose from the start, and along a winding road to success

Today, Charles Bender is the CEO of two thriving companies: Attentus Technologies is an outsourced managed IT services provider, while Skynet Broadband offers high-speed internet service to rural Washington State. And his new social-impact startup finds ways to show underprivileged kids that there are many ways to achieve success and get out of poverty.

His path to success is as unique as every entrepreneur’s—filled by ups, downs, and surprising pivots.

“I’ve reinvented my direction several times,” he explains. “And my evolution as an entrepreneur has always been driven by a couple of things. One is that I became unemployable; my resume doesn’t make sense.”

The other motivation was a desire to overcome family poverty.

“Initially, everything in my being was focused on ending generational poverty in my family. My dad was poor, his dad was poor, and every generation struggled. I decided that I’m going to end it for me, my family, and my children—and just change that direction.”

Now, he’s following his purpose to make an impact and share his experience, aiming to help others overcome their struggles through knowledge.

Canvassing for inspiration on the “Street of Dreams”

At 21, Chuck had just left the U.S. Navy, where he served as fire controlman operating ship weapons systems. He planned to work for Boeing Company just north of Seattle, but the aerospace giant had enacted a hiring freeze. Instead, he answered a job ad looking for registered representatives in an investor group, paid to get his license, and started selling.

“I learned how to sell mutual funds, unit investment trusts, insurance, that kind of stuff,” he says. “I was young and didn’t know anything, so I just copied the guy who was good.”

The strategy worked—he wound up being “pretty good at it”—but Chuck wanted more. He craved financial independence and needed to learn how others achieved success.

Seattle has a neighborhood called “The Street of Dreams.” It features large, beautiful homes that are staged for public tours. In the late ‘80s and early ‘90s, Chuck recalls they sold for about $700,000, which seemed like an impossible sum.

He resolved to find out exactly how someone could afford those homes. Chuck started driving through the neighborhood until he spotted someone outside, often mowing their lawn. Then, he’d get out of the car and ask them.

“I just didn’t have anybody in my world like that to talk to,” he explains. “So I used to ask these people: ‘What do you do for a living to get here?’”

Perhaps surprisingly, no one ever treated Chuck with suspicion, and most were friendly because of his vulnerable approach. He’d tell them about growing up poor, and they shared their stories. Many of these homeowners were doctors or lawyers who had gone to school for many years. That wasn’t “in the cards” for Chuck. But some of them were entrepreneurs who rose from modest beginnings.

“Those people I resonated with,” he says. “And I had my plan to become an entrepreneur.”

Phase 1 of E-Volution: A first business success—followed by sudden failure

After working as an investment broker for a bit, Chuck jumped into entrepreneurship and weathered early struggles—and a few business fizzles. But in the late 90s, he enjoyed success as a franchisee of a national dating service company. The organization did old-fashioned sales and marketing, sending saturation direct mail to households across the U.S. The company grew to $20 million in annual revenue by 2001, and it was Chuck’s first business that qualified him for full membership in the Entrepreneur’s Organization (EO).

The dating services company was highly profitable, but it eventually encountered two huge problems—one that was overcome, followed by another that spelled its doom.

Chuck started as a franchisee of a national company, and it went well, at first. Then the brand ended up on the news for lying to customers. He sued the national company and, along with 12 other franchisees, split off into a new service that backed up its promises. Rebranding, getting licenses, and rebuilding trust involved a tremendous amount of work. His new company was set to recover by 2003, but Chuck quickly learned that it had a fatal flaw.

“It was a zero-recurring-revenue model. Basically, we sent out mailers, we got leads back, we closed those leads, and we lived off the cash from what we closed,” he explains. “It was highly profitable but, unfortunately, it made us think that we were really good at business. And we weren’t.”

The passage of the Do-Not-Call Implementation Act of 2003 effectively destroyed the company. Suddenly, all of the organizations that had done telemarketing now turned to direct mail. Instead of getting one or two pieces of direct mail per day, most households were now getting 10 or 12, and the dating services mailers dropped from a 0.02% return (profitable) to less than half of that.

“It just blew our model up,” Chuck recalls. “We had no answer; we couldn’t solve it. We struggled, trying five different business models.”

The only saving grace was that his company had started charging a maintenance fee. This small source of income allowed him to “close the business and complete contract obligations with existing customers.”

A new opportunity, and finding the right structure to scale from past experience

While he was still running the dating service, Chuck moved out of the city to a rural part of Washington, buying a house in the country. He soon encountered a problem: he needed reliable internet to run his company’s online CRM platform, and this connectivity didn’t exist.

After evaluating solutions, Chuck had to install an incredibly expensive T1 internet line. His service providers suggested putting an antenna on his house and selling the connection to his neighbors to defray the cost. The idea for Skynet Broadband, which now provides internet service to rural Washington, was born.

Chuck bought the company he’d used to install his T1 line in early 2003. As his dating business faced an existential challenge, he was starting a new venture. Chuck sold assets and put them into the ISP, which began with the 13 customers who shared his home’s connection.

He had learned a vital lesson from his previous enterprise: a recurring revenue model would allow a business to weather ups and downs.

“We had been confident that [the dating services company] could withstand whatever, but we couldn’t,” Chuck says. “That was probably the biggest lesson I learned. Sell ’em once and get paid forever is a way better model than sell them once and never get paid again.”

There were serious challenges ahead, however. The ISP was an infrastructure-heavy business that required significant capital investment. He worked on Skynet for two-and-a-half years before seeing any profit.

The ISP also required solving numerous technical problems. It was an “accidental business” he’d stumbled into, and Chuck didn’t have much tech knowledge.

“Playing video games was probably was my biggest experience with the internet,” he says.

One by one, he pushed through the challenges and built a successful company. Along the way, he figured out better ways to solve IT issues—and this know-how spurred his next venture.

Launching Attentus and beginning to build a business by design

Later in 2003, Chuck decided to start a new business: Attentus managed IT services. He applied several lessons from his previous company, plus an invaluable one from his time serving in the U.S. Navy.

Chuck had always hated his lack of control in the dating services company. The sell-as-you-serve model made that venture financially vulnerable to shock events. And he had little influence over the customer experience.

“Much of it was outside of our control in terms of the customer being happy,” Chuck explains. “You’re introducing people based on demographic information, and happiness is if they fall in love and get married, and unhappiness is anything less than that. So, for every happy person, there were probably two or three who weren’t.”

With the ISP and managed IT services businesses, he could finally influence the outcome and ensure that customers were satisfied. To this end, his number-one core value for the new enterprise was “build relationships.” And neither Skynet nor Attentus were transactional companies that relied on generating incremental revenue.

Chuck also used some naval quality assurance (QA) know-how to deliver on Attentus’s promise to customers. In the U.S. Navy, a ship full of 18 to 30-year-olds can travel anywhere in the world to make war while reliably maintaining complex equipment. Detailed processes help them do it. Every maintenance task is outlined on a card with steps for everything that needs to be done, whether it’s one to 10 actions or one to 50. Chuck noticed that a proactive system like this didn’t seem to exist in IT, where the approach usually involved fixing something after it broke.

“I was able to apply what I learned in the military to the IP business and build a model that proactively found the leading indicators of a challenge,” Chuck explains. “We fixed things before they became a problem to improve uptime and client outcomes.”

Today, many of these IT tools exist in automated form. But Chuck had revolutionized both of his new companies with a manual process. The result was happy customers who rarely had to submit tickets for problems—they could focus on their business.

When this process combined with a recurring revenue model and the Entrepreneurial Operating System (EOS), both Skynet and Attentus achieved durable success.

The next challenge, driven by a powerful purpose

Like many entrepreneurs, Chuck is looking toward his next project. And his latest venture is very personal. Growing up poor and seeking to end the cycle of family poverty had driven him to find answers from wealthy people mowing their lawns on the Street of Dreams.

He’d taken this unusual step because he didn’t know successful people—he hadn’t been exposed to a different way of thinking. But the children of those wealthy individuals—and maybe their friends—certainly grew up with this benefit.

Chuck dubs this concept, “thought privilege.” And he is committed to finding ways to show underprivileged kids that there are novel ways to achieve success.

The project is still in its infancy. Chuck is talking to others with similar stories to see what they have in common and honing his leadership skills in the Entrepreneur’s Organization. But he is enthusiastic about the possibility of showing young people ideas that can change their life.

“The things I’ve valued most in life were personal sovereignty for my family and being able to build something for the future that would support lots of families—not just a one-off business. Now, I’m testing the thesis of this project to help others, and developing the leadership skills to make it happen.”

As for lessons from his long and unusual career, Chuck offers a piece of simple advice to other entrepreneurs:

“The biggest thing I’ve learned is that you always have to be learning,” he says. “The moment that you think you know it all—that’s when the problems begin. Successful business people evolve!”