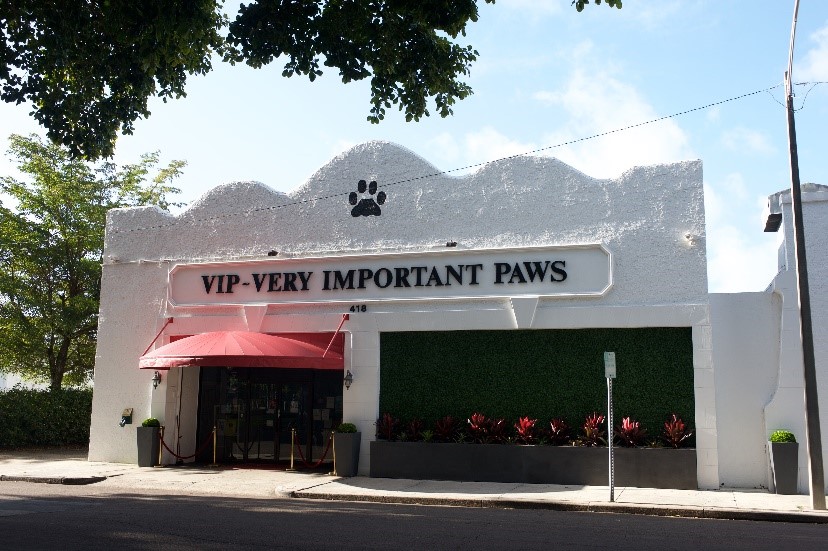 By the time Very Important Paws Co-founder and Partner Will Corrente hired The Profit Recipe in April 2018, his luxury boutique for dogs was way ahead of the pack.

By then, Very Important Paws (VIP) was 14 years old and home to the swankiest canine accommodations in  West Palm Beach. It offered birthday parties, barbecues, day camp, activity days and even swimming at an inground pool.  After a day of interacting in a 24,000-square-foot climate-controlled indoor/outdoor facility, overnight guests could retire to their own private suites. There they could dine privately, sip on filtered water or sleep on a raised bed. Deluxe training and grooming services were also available a la carte. The business runs 14 hours a day, 365 days a year.

Being a top dog, however, attracted copycats. As competition mounted over the years, Corrente concluded VIP’s consistent innovation was its key to staying in the lead.

“For us, it wasn’t as much about growth,” said Corrente. “Growth will come. It’s really more about innovation. We are lucky to be the dominant player in our market. Our goal is really if we continue to innovate, growth will come with it.”

As competition grew, Corrente became a member of Entrepreneurs Organization and leader in the business community, read extensively about innovation and management, and tried to implement a variety of changes on his own. But as hard as he tried, he could never seem to get traction.

Looking back now, he recognizes that his efforts lacked focus, follow-through and complete system approach.

Initially, staff would get excited about the ideas Corrente brought back to the team, but their enthusiasm would wane since they were piecemeal approaches v a full system.

By 2017, when Corrente decided to try to implement some of the 6 components of Entrepreneurial Operating System (EOS) Gino Wickman wrote about in his book Traction, he and his management team were unable to achieve consistent results.

By spring 2018, Corrente realized he was going to need outside help to maintain the innovative culture and systems that were already happening organically at VIP. In addition, he would need to create career paths for employees with growth and managerial opportunities with clear expectations, accountabilities inside a solid management system, so in April he hired Licensed EOS Implementer Cesar Quintero of The Profit Recipe.

“Making the investment as a company in a facilitator, who is with us for a one-year period, shows the staff and the managers that this isn’t a $15 book that we picked up,” Corrente said. “It says that we’re not going to try to do it on the fly, we are committed to its implementation and success and are making an investment in you and the company to achieve it.”

Within a few weeks, Corrente called a company-wide meeting to explain why senior leaders had recently disappeared for a day of off-site meetings and why a consultant named Cesar was suddenly appearing at the office. 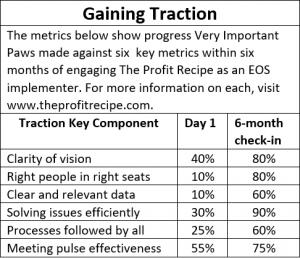 “EOS is basically a total management system that brings buy-in from all the levels of the organization with clear expectations and a communication rhythm,” said Corrente. “And the feedback from that meeting was really positive. Everybody commented on how they’ve noticed a difference in the company and, now that they know all the work that was going on behind the scenes, they’re super excited about being here.”

Since then, Quintero has helped the company translate its core values into job accountabilities and expectations, set quarterly goals, and develop an “accountability chart” that clarified each employee’s responsibility for reaching those goals. The company has also implemented regular meetings where all employees are expected to outline the progress they made toward reaching specific, quarterly goals.

“The business is 14 years old,” said Corrente. “What we really needed to do was to provide a structure so that people who were with us for a long time, felt like there was someplace for them to grow to.”

Corrente, meanwhile, has been freed up to pursue projects that interest him most, including bold new ideas that will help VIP separate further from the pack.

“For me as the entrepreneur founder, I realized I could do more things that were more exciting and let go of some of the mundane things to people because they now had trust, structure and clear direction,” he said.